To the outsider there is something forlorn about the Tapas 7 and the McCann's Portuguese holiday and reading the former's accounts of it is a numbing experience. Quite how the group could have believed that a holiday abroad in dispersed accomodation with nine children at their most demanding ages, and with the assistance of only one in-law and no nannies, would be "relaxing" is a mystery. And the experience itself was reminiscent of out-takes from Carry On Camping: the resort was semi-deserted, there were disputes about the facilities, the weather was miserable until May 3, the pool was freezing and unusable, the sea required a wet suit, the beach was like a grey morass, and a stomach bug, complete with vomiting such as one of them "had never experienced before", ran through almost all of them for the whole week.

In these unpromising conditions the 9 spent their time schlepping the juniors to and from creche, kids' club, play area, eateries and (occasionally) the sea-side in between lengthy - when their bowels permitted - jogging runs, windswept watersports and tennis - before another whirl of bed, biscuit and bath time followed by execrable English food at the "tapas" bar gobbled down in the intervals between the famous checking. And early to bed on most nights.

Surprisingly, perhaps, not one of the 7 appears to have had anything except a wonderful time, with none of the bitching or depression that such circumstances can often unleash. Or so they say. To the questions of the investigating officers, some of them with rueful memories of the stress of small children - with one of them, a woman, the eyebrows can almost be seen rising at these sunny responses - the answers were always the same: everyone got along just fine, everybody was really happy. Everything was lovely.

Were they fibbing? In the strict sense I think not, with some important exceptions. The explanation for much of their behaviour is surely in the personalities and experience of this naive and thoroughly unsophisticated crowd, meritocrats all, "outer-directed" people to whom careers have been everything and whose children have all been placed in the optimum planned birth slot after the completed first lap on the way to success and the "civilised" life - mid to late thirties.

Reflective about their emotions, their present circumstances or anything else? Hardly at all. Capable of real insight into themselves? Not on the evidence so far. If you want a Hamlet meditation on the tragedy that has enveloped them you'd better go elsewhere for these are, in the most literal sense, deprived people. Everything is not false but pasteboard, as in those appalling, self-delusory, round-robin Christmas letters that we sometimes receive: holidays are "wonderful", friendships terrific, parenthood an unalloyed pleasure, while the possible abductor is, of course, a monster, never seen in human terms but through filters, as the drawings of Jane Tanner illustrate. 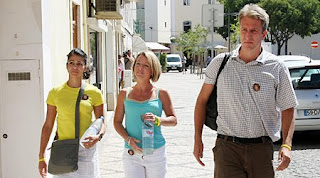 Did something...
Even the weird and disturbing premonition of disaster that Kate McCann had about the holiday fails to raise much reflection. Fiona Payne: "Kate...what she said, when I was sort of twisting her arm really, she was unsure, I think Gerry was immediately quite keen...to come and Kate had said, when I rang up, she said ‘I don’t know why I’ve just got an uneasy feeling about it’. And I don’t know why she said that, I don’t think she even knows, I never mentioned it to her since." These people are not practised liars on the model beloved of some amateur detectives, very unlikely "swingers" indeed, and the unsatisfactory nature of their descriptions of what happened does not look like group conspiracy. The weaknesses in their story, again with important exceptions, are connected with their inability to tell, or grasp unaided, the truth about what is happening to them. 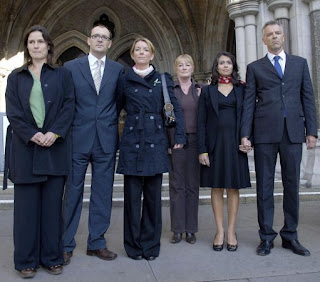